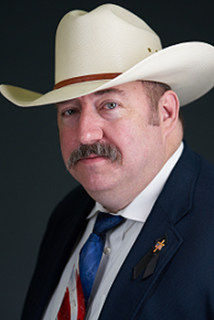 Kelly Rowe was born in Fort Worth, Texas on Friday, September 13, 1968.  In 1993 he began his career with the Midland County Sheriff’s Office.  Kelly Rowe began his tenure with the Lubbock County Sheriff’s Office in 1999 as the Administrative Lieutenant of the Detention Division.  He was promoted to the rank of Captain in the Detention Branch and later transferred to Law Enforcement.  Shortly after, he formed the Transition Team and selected the initial staff and would ultimately be responsible to ensure that oversight and all tasks were completed to facilitate a smooth transition into the new facility. Kelly then was promoted to the position of Chief Administrator which had overall fiscal responsibility for all Sheriff’s Office budgets and funds. In addition, he was member of the Tactical Operations Unit and was the Commander of the Honor Guard until his appointment.

On September 16, 2009 he was appointed by the Lubbock County Commissioners to the position of Sheriff.  Then on March 3rd, 2010 Kelly won the Primary election for Sheriff of Lubbock County.

Sheriff Rowe attended high school and college at New Mexico Military Institute.  He entered into military service in the United States Army.  In 1992 he attended and graduated from the Basic Peace Officers Academy in Midland, Texas.  Sheriff Rowe is married to his wife, Nola.

Testified before the Texas State Legislature to prevent the abolishment of the Texas Commission on Jail Standards that would have placed regulatory control over county jails under the Texas Department of Criminal Justice.

Invited to speak on a panel based on my expertise on “Innovative Jail Design and Operations” at the National Press Club in Washington D.C. Participated in national training video for the National Institute of Corrections for “Planning of a New Institution.”

Participated in national training video for the National Institute of Corrections for “Planning of a New Institution.”

Member of the Large Jail Network (by invitation only: Bi-Annual meeting of representatives of largest facilities throughout the country to discuss current issues involving jail personnel, administration and other issues.

Served as a member of the development staff and a speaker for the Basic Jail Administrators Course at the Correctional Management Institute of Texas at Sam Houston State University.

Presented Lubbock County innovations and participated in the authoring of the All Sheriffs’ Authority 2019 Mental Health Report and recommendations along with the accompanying letter to the Attorney General Barr.  This collaboration was facilitated by the National Sheriffs’ Association, Bureau of Justice Assistance, and the National Institute of Corrections.

Participated in finalizing the County Self-Assessment Tool for the national Stepping-Up Initiative to reduce the numbers of people with mental illness in our jails.  Launched the program in Lubbock County and ultimately were honored with “Innovator County” Status for Texas.  This program was a national collaboration with multiple groups involved including: American Psychiatric Association, National Association of Counties, National Council of State Governments, National Institute of Corrections and many others.

Presented in the Webinar, Stepping Up 101: A Primer for Sheriffs to educate and assist Sheriffs Offices on the benefits of participation with the initiative.

Provided testimony to select U.S. Senators and their Chiefs of Staff in Washington D.C. on the importance of renewing the CCHBC grant funding for support of mental health services in Texas, as well as other states.